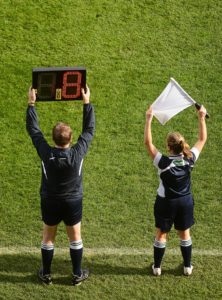 Linespeople play a very important role in our Association and are a key part of the match officials team. Below are a number of key areas to be aware of with regards to the role of a linesperson.

479. There shall be two linespersons, one at either side of the field. They may be appointed by the referee, County Board, Provincial or Central Council or their sub committees.

480. The linespersons duties shall be:

481. The Linespersons may change sides at half time.

Key Areas For A Linesperson

– Off the ball incident

– Incursions on the pitch