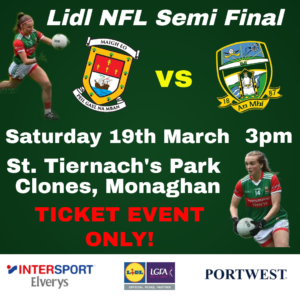 Mayo vs Meath takes place on Saturday 19th March at 3pm in St. Tiarnach’s Park, Clones. Game will be live on TG4 and Midwest Radio.

Get your tickets here: https://www.universe.com/events/lidl-nfl-division-1-semi-finals-double-header-tickets-W5S4M3?fbclid=IwAR3icMdxJm1lGk8QRd2UEA7VUjskw5eNVFL-NX318DlQeoUj-GnENDEA8sI

An interesting semi-final lies in store when Meath, the TG4 All-Ireland Senior champions, take on an evolving Mayo captained by Kathryn Sullivan of Castlebar Mitchels.

From the team that beat Donegal last time out, which was a third straight victory for the Green and Red, goalkeeper Aisling Tarpey comes in for Laura Brennan while Éilis Ronayne replaces Saoirse Lally at corner-back.

Meath manager Eamonn Murray has made four changes to the team that lost out to Dublin by just a point in a thrilling Páirc Tailteann clash. Katie Newe, Orlagh Lally, Megan Thynne and Emma Duggan come into the team in place of Ailbhe Leahy, Kelsey Nesbitt, Orla Byrne and Ciara Smyth.

The Royals lost by just a point to Dublin last time out following wins over Cork and Waterford but will have taken real encouragement from that one against the hungry Sky Blues, who were out for a measure of revenge following last year’s All-Ireland Final loss.

Mayo have been motoring quite nicely this year and claimed three wins from three in the group stages, to top the pool recording wins over Westmeath, Galway and Donegal scoring 15(!) goals in 3 games with 8 players on the panel making their Senior League Debuts.

This years team is an exciting blend of youth and experience with standout performances from the likes of Sinead Walsh (MacHale Rovers), who has bagged 4-06 already in her debut season, Sherin El Massry (Westport), Hannah Reape (Knockmore) and Laura Moran (Westport) playing alongside Fiona McHale (Carnacon), Sinead and Lisa Cafferky (Kilmovee Shamrocks) as well as Captain Kathryn Sullivan (Castlebar Mitchels). This blend will be vital if Mayo are to cross the line in Clones this Saturday and bag a place in this year’s League Final.

Facing off against Meath may be a dubious reward for their unbeaten run but this fixture will give Moyles and his players a real indicator of exactly where they stand with championship fast approaching.

Mayo lost to Dublin in the 2021 semi-final and will hope to go one better here, while Meath go in search of a first Division 1 Final slot since 2006.

Let’s bring the colour and noise to Clones on Saturday and cheer on our ladies in the Green & Red!!

Best of Luck to the team and management!

Introducing your Captain & Vice Captain for 2022!

HEC All Stars
Scroll to top